May 3-I woke up several times this morning to simply roll over and fall back to sleep. He made coffee, ate breakfast, and watched television while I snored the hours away. When I finally woke up, I was well rested and feeling less sore than yesterday. I ate a warmed up sweet and sour chicken rice and veggie dish in bed relaxing. We checked out at 11 and walked the 25ish yards into That Brewery.

We got two samplers of every beer that they currently have on tap including the Arizona Trail Ale which we enjoyed a few days ago. Zig Zag joined us at the table as he waited for the cabin to be cleaned and two days of rest. We both shared tater tots smothered in cheese and bacon then each had a burger. Two other thru hikers joined us as well as we all chatted for hours. For desert, we each had two scoops of ice cream with chocolate syrup and whipped cream. Bern joined us as we were getting close to leave. He is doing his own adventure that will lead him up to Canada. He has hiked thousands of miles and would of been nice to hear more stories, but the trail was calling.

Around 3, we walked the short distance back to the Pine Trailhead and began an uphill climb out of town. My body was “town soft” meaning it was slow going for a bit. My heel and calf are feeling better, but still a bit off as I climbed uphill. The terrain was a bit rocky and I just took my time not wanting to aggravate my foot. I joined Paperweight at a water source that flowed across the trail. We are in higher elevation now so water will not be as big as an issue.

I tuned out to Podcasts as I walked thru the ponderosa forest. I found him at a huge campsite 8.7 miles from the trailhead at Weber Creek. We relaxed and ate on a huge fallen log under the huge trees with the sound of flowing water. It was a beautiful campsite and even an owl flew near by watching us for a minute before flying away. I loved our time in Pine, but we have miles to go.

May 4-
We both managed to sleep in until 6, but we still were on trail by 6:45. My body was stiff this morning so it took a bit to warm up on the uphill. We met a group of hikers finishing up the Highline Trail which is about 60 miles. We had beautiful views of the Mogollon Rim. The morning miles were pleasant with a nice break at a piped spring.

We left the Highline Trail following an old gravel road uphill. We took a lunch break under a few trees as a horned toad watched us eat. The trail followed this road until it dipped off onto a trail heading straight up to the top of the climb. It was a steep section that had my calves burning. At the top, there was a monument for the Battle of Big Dry Wash in 1882 that occurred a small distance away. A bit farther up the trail we came to the General Springs Cabin which is a historical site. 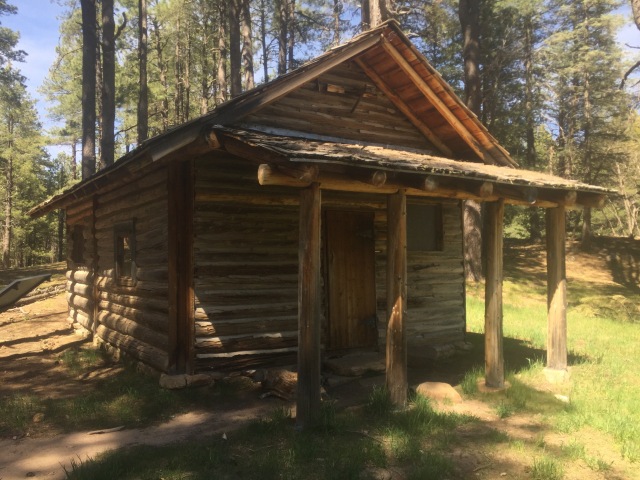 The two of us walked together as the trail dipped into a canyon with some water flowing. It was a beautiful section. We hiked a grand total of 19.8 before setting up camp for the night.

May 5-
Endless ponderosa forest again today. We simply walked most of the day with breaks along the way. On a forest road to a dirt trail with many fences to be opened and closed. We passed the 500 mile mark as well. We covered 19.1 miles fairly quickly and set up camp earlier then usual. 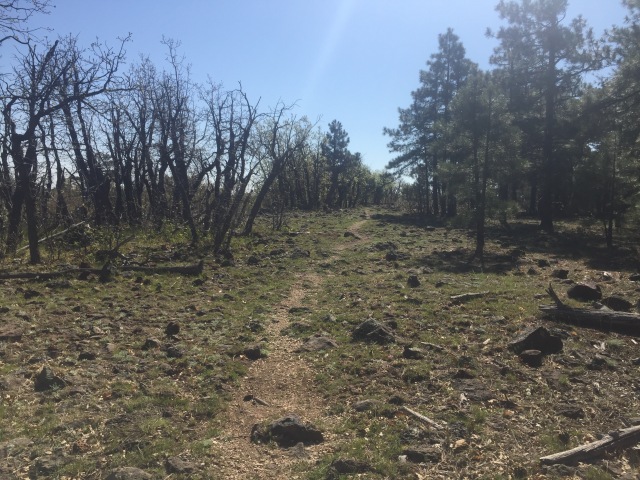 May 6-
The entire day was spent on and off dirt roads as people on ATVs zipped by. It was easy walking in a forest with little views. We both zoned out to Podcasts most of the day. We did take a long break at a water source where I got chilly. It was also a very windy day and with little uphills I almost considered wearing pants again. Then it was back to woods walking for the rest of the day.

We crossed the paved road and realized he had cell service. We were able to book a cabin for more then half the usual rate since we would be arriving on a Sunday at Morman Lake. This boosted our morale as we cruised back into the woods following an old railroad bed. It was easy walking and lots of birds flying about this evening.

Before the gate, we saw a herd of animals. I thought they were just deer, but they were also a few huge elk mixed if. They couldn’t figure out how to jump the fence so they just walked along it as far away from us as possible. We camped after crossing a dirt road in the pine needles under a few ponderosa trees after 21.9 miles.
May 7-
It was chilly this morning and we only had a quick four miles to get into town. We relaxed in the tent a bit later knowing things don’t open until 8 at Morman Lake. It was chilly this morning as I wore my down jacket, hat, and gloves for a mile or so. We joined the Najavo Springs Trail towards Morman Lake. 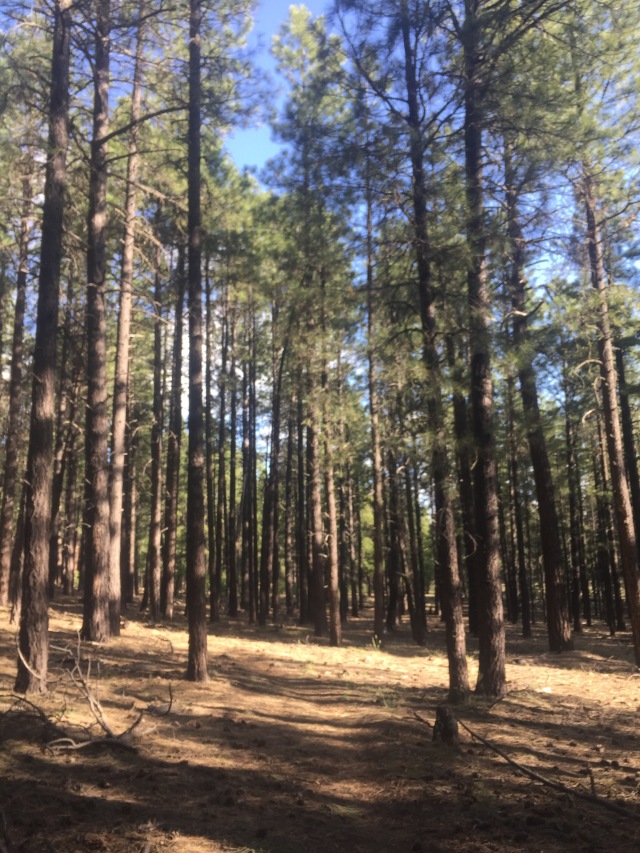 We were excited to see dozens of aspens trees on this trail.

We stopped at the restaurant first excited to order a meal. But our day got much better quickly, when we told us they are only doing the breakfast buffet! Yes please! We had eggs, French toast, hash browns, biscuits and gravy, the best bacon I’ve ever ate, fresh fruit, muffins, and orange juice! We both got our $10 worth of food for sure. We then grabbed our mail drop that we had personally dropped off in March. Then a bit before 10, we visited the registration office. The girl let us check into our room super early and we paid $73 with tax for a full cabin when the regular rate is $170. The cabin was so cute and had everything you could need. We did our chores, shower, and laundry before heading back to the lunch buffet. It wasn’t as rewarding since it had been sitting a while and we were both already pretty full. We grabbed a six pack and some ice and retreated to our cabin for the rest of the day. I had no cell service and there was no working wifi so it was a relaxing day with little distractions! We watched our typical Impractical Jokers and Shark Tank before curling up in bed. The heat wasn’t working right so it was pretty chilly and he grabbed his quilt. Another tough day in the life of a thru hiker!