Sept 17- After a zero day, it is difficult to be motivated to get out of bed. A bit before 9 we headed down the street to No Sweat Cafe for a delicious healthy meal. We even had real maple syrup to put on our whole wheat pancakes, but the super thin hash browns were the best. We headed back to our place at the hotel to shower one last time and pack up. We walked back to the highway that would lead back to Macdonald Pass. We stopped at Hardee’s for a few more calories and it was well worth it even though we didn’t start hitching till around 1:45. A nice man cleaned up his seats for us to pile in as he drove us back to MacDonald Pass on Highway 12. I have truly enjoyed all of the hitches on this trail. You are typically picked up at a highpoint then dip into town and the ride out of town winds up mountains. We had to do a short walk along the highway before dipping onto a trail and following a gravel road upward. I still feel strong to complete this hike. We walked along this path for quite a few miles before joining a trail again dipping into the woods. We passed an old wooden railroad that had fallen into disrepair. It was likely a sit where a mining had took place. I also enjoyed watching a long train go under the mountains through a tunnel. These are places people might only explore on foot or ATV. I love seeing our beautiful and diverse country this way. As we came out of the tree coverage, we were met with a quick rain shower as we threw on all of our rain gear the storm passed a few minutes later. The three of us took a break to lighten our food carry. We walked on until night fell before pitching our tent. We spend most nights looking at our maps, discussing the past and the possibility of our future together. 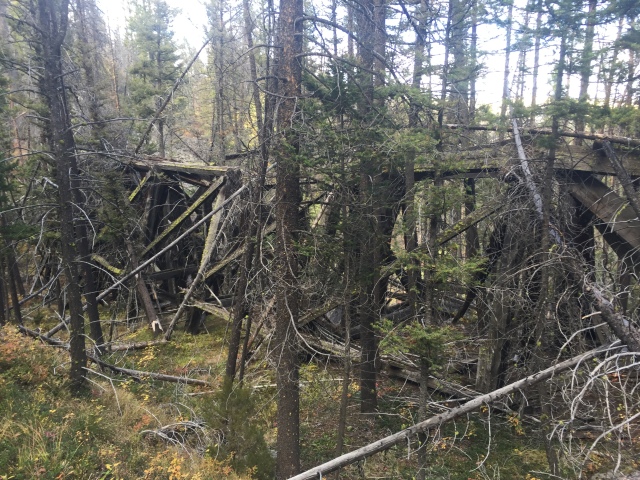 It did not rain once today making it almost a perfect day! The trail followed a ridge line for miles. Scenic views and happiness filled my heart. I soaked in the sunshine and appreciated every moment. It is getting to the final few days of this amazing adventure and the completion of my triple crown of thru hiking. It is difficult to put into words the beauty so simply enjoy the photos. 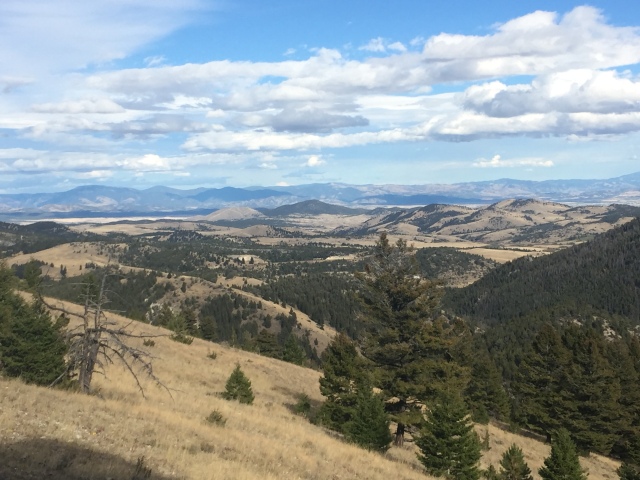 We were on the trail by 7:20 this morning and doing our first of many climbs. We busted out the miles and came to a parking lot at Flesher Pass. There was a water cache waiting for us, a picnic table, and a privy. We each decided to cook a meal for an early lunch. We ended up spending almost an hour here and as we were packing up Crocs and Chipmunk arrived. We then debated for a while about which route to take. They found a shortcut that involved a bit of road walking then following the powerlines. It would save some climbing and sometime, but I wanted to hike the trail. Paperweight and I debated it for a bit before I said I wanted to do the trail and he stormed off up the trail. I finally caught up and we took a break together agreeing the views up here were worth the extra time. We have had to bail so many times off of the trail due to storms and the sky was clear this afternoon so I saw no reason to road walk. P.S. I hate unnecessary road walks. Our two friends never arrived so we knew what route they took. We walked the ridge then began dipping down and the sky turned dark. We put on all of our rain gear and prepared for more miles of wet climbing. We walked a road before crossing Rogers Pass where we could have bailed into town, but we knew we shouldn’t. There is a small parking lot here and a trucker was taking a break. There was so much trash, toilet paper, and other nasty things near this spot. Obviously, it was not from thru hikers. Maybe someday they will install a privy or people will not be so nasty. We began climbing up as the rain pounded us. We debated camping, but wanted to put in a few miles. Unfortunately, this left us in a bad situation as we were above tree line with few safe options to camp and hide from lightning strikes. We passed a locked yurt before continuing to look for a spot. We decided to follow the powerlines downhill into the tree. We went down much farther then I would have liked trying to find a flat spot. We ended up just calling it and setting up as it poured. I was shaking, cold, soaked, and just wanted to get inside the tent. Our one vestibule makes it tricky so we work together to get everything set up before crawling in one by one. I always have a dry outfit to wear to bed and it was nice to be out of the storm. We cuddled together and looked at what tomorrow would bring. I had service to check the weather and realized we would be struggling in storms for the next few days. Feel asleep listening to the rain fall on the tent and the buzzing of the powerlines. 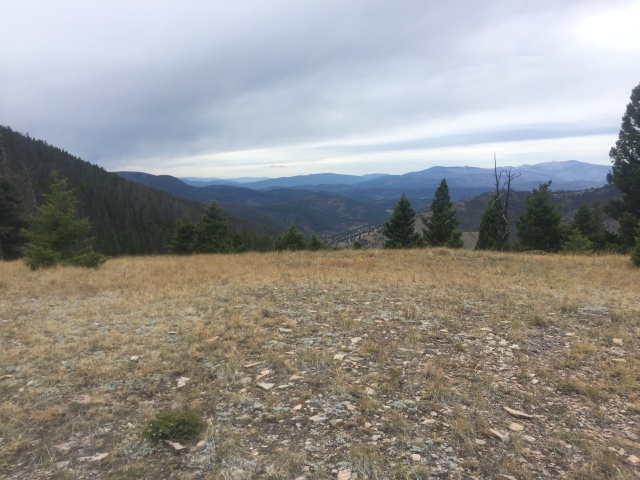 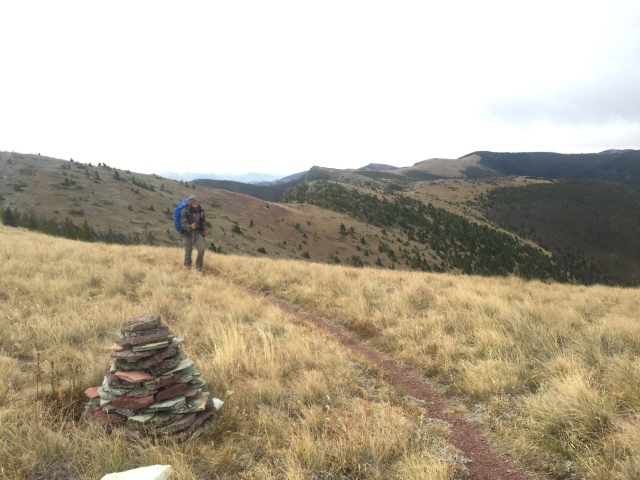 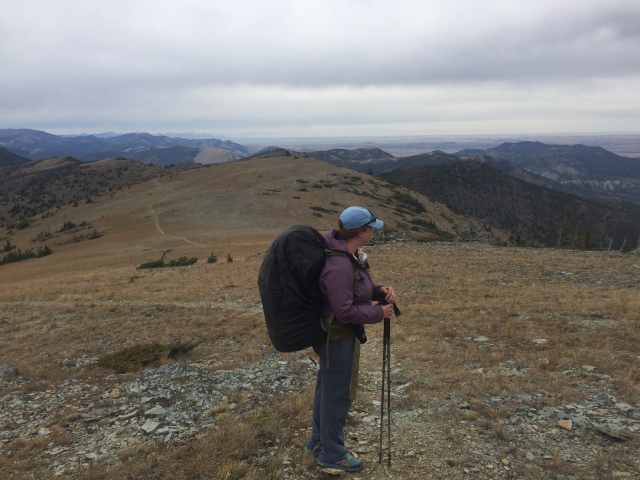 Today was one of the most miserable days of hiking so far in my life! It was difficult to get out of the soaked tent and slide on wet shoes. We didn’t make it far before it started to rain again as we began to climb in elevation. The trail follows the divide meaning the edge of a mountain so the wind was whipping. Numb toes and hands for the first part of the morning. I pushed on already feeling exhausted. It is also a ladies favorite time of month to top things off. We stopped for a quick snack break at Lewis and Clark Pass, but within five minutes I was shaking so I threw on my pack and continued hiking. The higher we climbed the worse the weather became. The rain turned to freezing rain then to little ice crystals that stuck to my gear and body. I just wish there was a shelter like on the AT to hide in or a town close by. Not today! We stopped again for a quick break where I just ate a pack of crackers and continued to shake so onward. The trail turned into snow as we followed Crocs and Chipmumk’s footprints upward. At this point, I’m just dreaming of a temperature controlled room and my bed. There were lots of steep up hills followed by muddy snowy downhills all day. I caught up to Paperweight as he told me there is a shortcut up the actual divide that will save a long downhill followed by a steep up. The other two had taken that way so we decided to follow their footprints. Mistake! It was a cross country trail meaning no trail just rocks and shrubs. The snow began falling harder and the wind was ridiculous almost blowing me over. Icicles formed on my clothing and gear as I struggled to keep up with him. I was then shocked to find their footprints twice going down steep rocks to the ground below it. If you have been following my journey, you would know I hate downhill on rocks! Especially when they are snow covered. Using my hands both times to crawl downward I was shaking, but I made it. I need to remember these days because I am much stronger than I think! More divide walking with the wind whipping and all I want to do is connect back to the CDT. It was almost two hours of stress that could have been avoided! No more of this I made him promise. I managed to fall down twice today on slippery terrain just bumping the same knee twice. Brutality! We pushed on trudging in the few inches of snow that fell downward towards non snow covered earth. Paperweight admits this was his hardest day on trail as well. We did 26 miles of this type of walking with maybe 15 minutes of breaks all day before setting up our wet tent by a stream. There were puddles in the tent with a wet sleeping bag as well. I’m so glad we could share in the misery together.

Unfortunately, it was raining as we packed up again. I may have cried in the tent out of misery and putting on wet cold clothes to begin hiking. He comforted me to the best of his ability, but I just had to suck it up and keep moving to get warm in the 30 degree temperatures. It would rain on and off all day blocking views that I know was stunning. I have been following friends I met on the trail ahead of us and saw the photos of the views that we were missing. This is the negative part of a thru hike as you have no option, but to keep moving. My fingers were numb in my wet gloves so there were few photos taken today. We hiked together most of the day besides the time we listened to podcasts. We did another marathon day with few breaks. We found a campsite not too far from our next resupply point. As we began setting up, the sun was out so we let the inner part of our tent dry out a bit with the help of a bandana. We are in grizzly bear country for sure as we have seen tracks, lots of scat, and a few claw marks on trees. We climbed into the tent as I was so happy to take off my wet stinky socks. This section is around 250 miles without a hotel, laundry, or much of an escape from the elements, but a quick resupply at Benchmark Wilderness before the push to Glacier National Park. I love being able to spent that many miles on a trail without the luxuries of town, but this section turned into a struggle due to the weather. But I’m strong and know soon the sun will shine and things will be dry again. 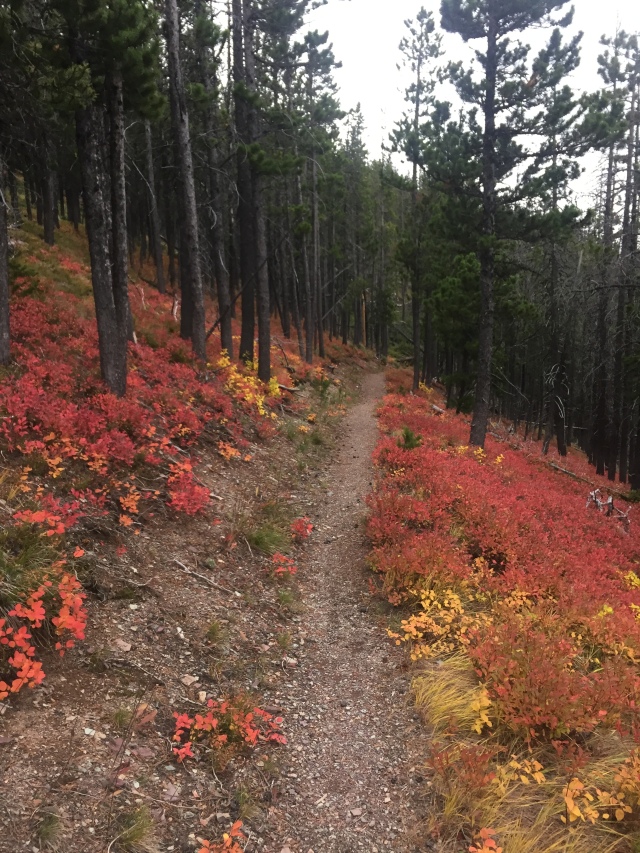