Sept 8- We took our time in the morning eating at the cafe two breakfasts before making our way to the road to hitch. In thirty minutes, a nice couple had us in the back of their car cuddling their adorable blue healer dog. They dropped us back at our trailhead and we began the easy walk on the gravel road toward where it connected back to the CDT. We easily hiked 3 miles an hours and the time passed quickly. I was relieved to find a privy at the pass and I really think I’m the only one who has used it this year. Chipmunk joined us before we all set out back on the trail. Lots of burned trees today making us move slowly and a few decent views. The sun was even shining! We just cruised along without breaks trying to get in the miles. We had dinner as the sun was beginning to set and had a plan to do quite a few more miles and hike into the night. But we had too many obstacles in our way, we would find out quickly. I left first walking quickly before I hit so many downed trees. It was insane! I would climb up on the down trees to hop down to another one. Branches were poking me and driving me insane. Maybe I completed one mile in 40 minutes or longer. We grabbed water and continued on in the dark managing to get off trail and continuing to hurdle the down trees. I called my dad the next day requesting a chainsaw. This section needs some love! We finally found a campsite a bit past 9:30 that was not level at all, but had to do. There would be no more climbing over trees this evening after many new bruises to my legs. There are so many down trees and burnt sections that your camping options are limited. I was exhausted and quickly fell asleep lopsided against the tent wall.

It was a morning struggle to get moving as I hit the trail at 8am. To make matters worse it took me 15 minutes to go .3 from getting off trail somehow while climbing over too many downed trees. I could have sworn I was on the trail. I finally caught up to my man who was enjoying a late breakfast at a water source. It was turning out to a beautiful day in the Anaconda Pintlers. We both split up listening to our own jams or podcasts, but could still see each other most of the day due to the burn section. As I made my way downhill, I saw a huge herd of elk in a straight line rushing over the downed trees and rocks. It was a sight I’ll never forget. To my surprise I would see three hunters out with their arrows and bows searching for the herd I had just watched flee twenty minutes later. One man was ahead and the other two were struggling uphill with small packs on. The trail wandering downhill followed by an uphill climb and into the sunshine. A huge elk came barreling down the trees as I walked by scaring me. They are such beautiful creatures. We climbed to the top of Pintler Pass together enjoying the views and small amount of snow left. Today was one of the nice days full of wildlife, views, warm weather, and happiness. We stopped after 26.5 miles by stream at the base of the next climb. It was a nicely established campsite where we stopped early. We enjoyed a warm meal in the daylight hours as Chipmunk joined us as the sun began to set. I wish everyday was like this, but then it wouldn’t be thru hiking. The one thing I had to accept early on my first thru hike is that there is no escaping the elements. Mother Nature controls all. 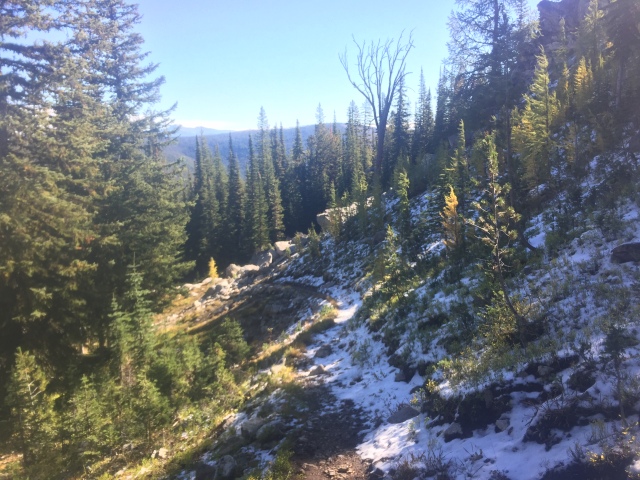 We got an early start and began the climb up Rainbow Pass at 9,052 feet. A few deer ran across the trail as I hiked up towards the pass. It was another beautiful pass in Montana with views looking down to a lake. There were a few slipper spots so I took my time climbing down the pass. Paperweight caught up to me and we walked past the lake together before stopping at a stream that feed the lake. We began our big breakfast meal for the day as Chipmunk joined us. We had much debate about how far to hike today in order to get closer to the town of Anaconda which is our next resupply point. We took too long of a break, but planned to get serious for the rest of the day. The two of us would not see Chipmunk again until town. We hiked together for many miles passing the hours and miles easily. It was a bit rainy so I threw on my rain gear and began the climb of Cutaway Pass at 9,032 feet. It still had some snow along the climb and the rain turned to small hail then a bit of snow. It was too cold to stop for long so I just continued hiking. We found a nice stream to eat dinner at before getting too cold I had to leave before him. I then ran into a man riding his horse with another pack horse behind him. The trail is not very large so I had to climb off the trail to talk to him. He was warning us that a snow storm was coming tonight and a batch of cold weather for the next few days. Paperweight caught up to me as we were chatting to this man before begin our third pass of the day up Storm Lake Pass at 9,149 feet. It was around 7 when we started this climb and debating what our real game plan was for the night. We could camp before the pass somewhere, but we did not find many spots and that would leave a marathon day into Anaconda meaning there would be no time to rest. We decided it was best to get up and over the pass tonight. We walked together and before we knew it our headlamps were on. It was a lovely view of the sunset and many more miles to go. We got to the top of a ridge and could not see any markers in the darkness. We followed the ridgeline before meeting the trail again in the darkness. We made it to the top point of the pass before beginning a downhill. Suddenly, we hear rocks falls right behind where we had walked. A few big sized rocks had just crashed down over the trail. It is all about timing. We looked up to see nothing wondering if it was a bear, mountain goat, or some other animal. We began the rush down the pass and towards the lake. The trail took many switchbacks down into the darkness. The time passed quickly and before we realized it was 10 pm. At the bottom of the pass, there were no campsites so we were forced to keep walking looking off the trail with our headlamps for a spot to sleep. It was likely in the high 20s by the time we found a semi flat spot next to Storm Lake. We quickly put up the tent before climbing in for the night. The wind was whipping off of the lake and it was a bit drafty in the tent. I had on most of my layers and we snuggled up to one another. It was after 11pm by the time we were resting comfortably with over 31 miles on the day and multiple passes with substantial climbing. Today is my longest mileage day ever. I look forward to seeing the lake in the morning light. 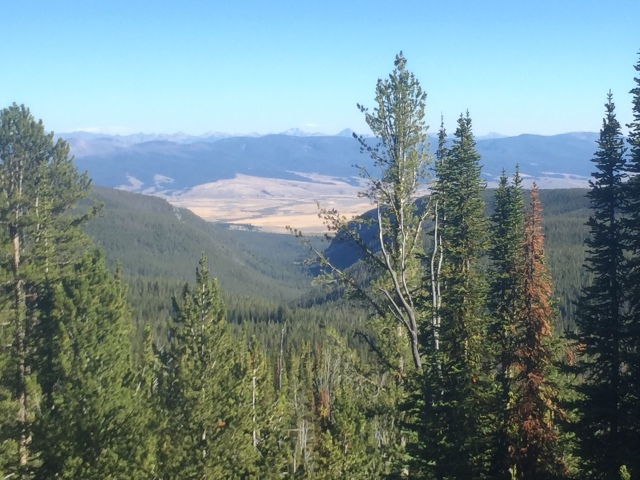 The morning rewarded me with the stunning view of the pass we climbed at night and Storm Lake. We quickly packed up with numb fingers before walking under a mile of trail before we joined a dirt road. We were walking so fast just trying to warm up on the flat terrain towards the town of Anaconda. We ran into a few elk hunters driving around looking for elk to kill. After 5 or 6 miles of the dirt road, we came to the junction of the paved highway that would lead to town. We were then walking along a flat highway for over 12 miles towards town. I detest road walks, but you have to connect your footsteps. I listened to Podcasts as vehicles would pass by and I would miss a few words. My feet ached as usual on flat roads before we took a quick break off the highway to have a quick lunch. We then busted out the miles making over 20 miles by 2ish. We hustled into town walking the road all the way in connecting all of our footsteps. This is true thru hiking. I would have loved to throw out my thumb and just this get there, but I would regret it in the future. So we walked along the road as cars zipped by into the town of Anaconda. We crossed the road and followed a sidewalk lined with rvs plugged into the houses nearby. We stopped by the grocery store hungry of course and bought lots of food before heading towards the hotels. Chipmunk was coming down the road so we told her our plans and she said we were crazy to do all those passes yesterday and her run in with a mama and baby bear. We stopped by the cheap hotel finding it full. So it was a quick stop at the post office and on to the nicest place we have stayed on the trail besides the hotel in South Fork because you cannot beat those comfy beds. It was called the Grizzly Den Motel and for a great deal we had two large queen beds, flat screen tv, mini kitchen, and a nice shower. It was in the low 30s outside as we rushed across the street and had a nice dinner together before retreating to the hotel for the rest of the night. It was a perfect night to stay inside and not be camping in those temperatures. My feet ached and the rest was necessary after a 31 mile day and a long road walk. 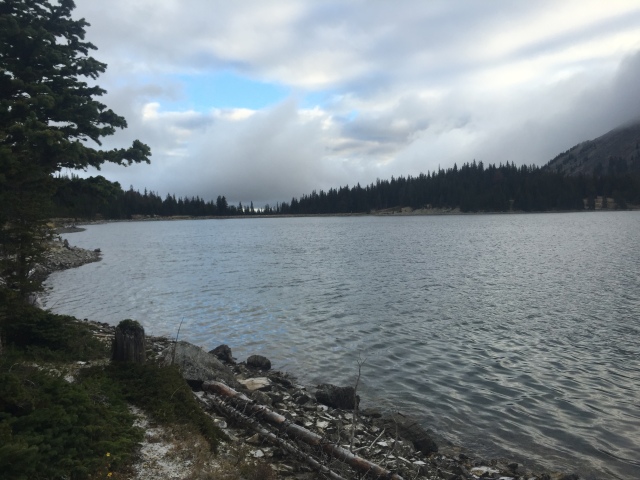