Shadowcliff was tough to leave as expected. We took our time this morning wandering back down the hill for a pizza lunch then back to the hostel. We lounged in their main room using the wifi and making phone calls way too late into the afternoon. Maybe around 3pm we wandered back to the trail. We began he hike back up the loop we had completed yesterday to connect back to the trail. We stopped at a USFS center and Chipmunk and I hid in the movie theater watching information about RMNP before he found us. We wandered back to work. It sprinkled a little, but overall was a nice day. The highlight of the day was a mama and baby moose on the side of the trail. They were beautiful and made my day. We did not make it too far this afternoon as we set up a little after 7 calling it a day. We had time to just lounge and relax for a change which was nice. Our big mileage day yesterday took a toll on us all. 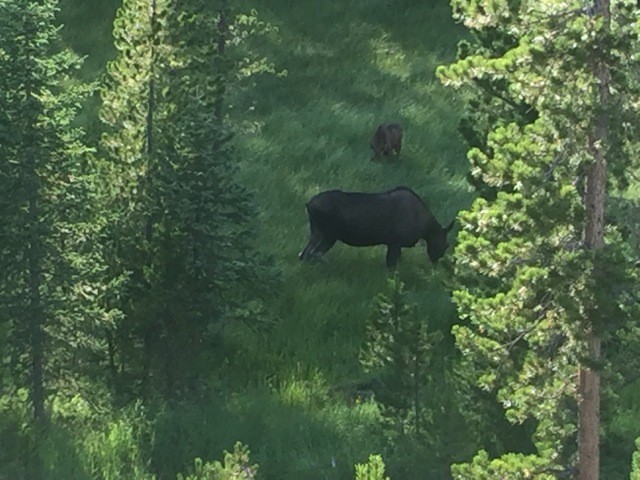 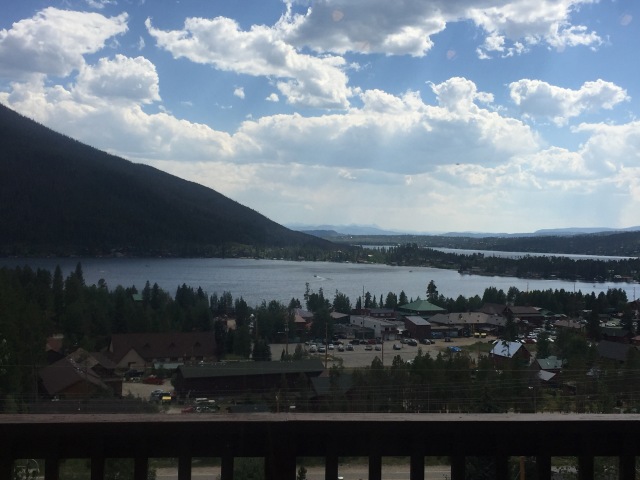 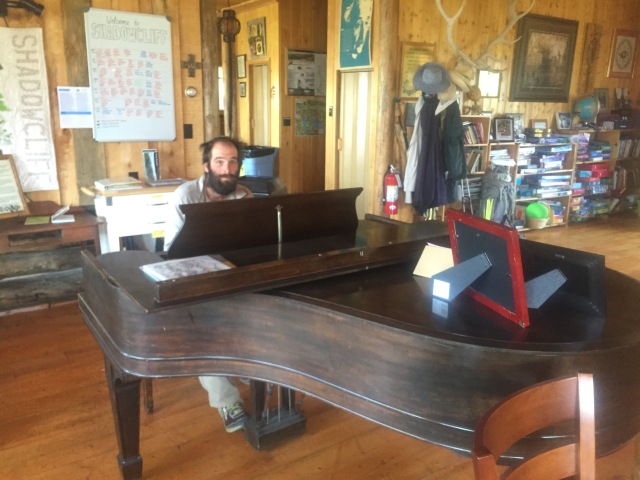 We got moving early this morning and walking into the Never Summer Wilderness which has been a running joke for a while. We have not had summer this whole trip. Okay that’s an exaggeration maybe a few days of summer. It was easy walking for the first part then the trail disappeared. We made our way along the divide then took a steep downhill again on shale. I hate this stuff. We took a nice lunch break at a stream surrounded my bright green and relaxed for a bit before getting moving again. We saw lots of people on dirt bikes that tore up the trail, but they are allowed to be here. We crossed a paved road and began to climb up towards the next summit. We went a little ways up, but you could still hear the cars where we camped. 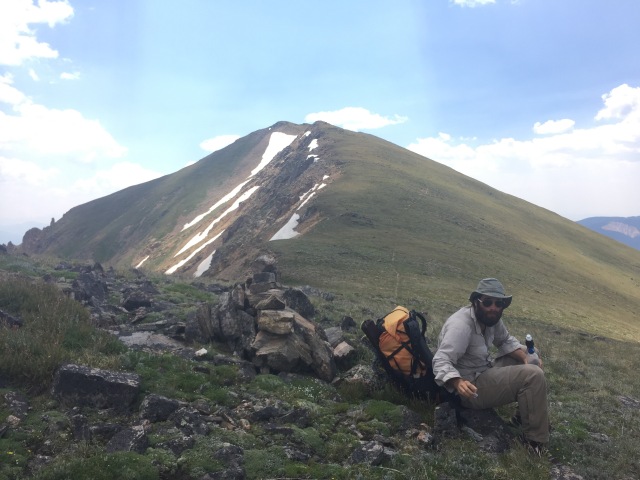 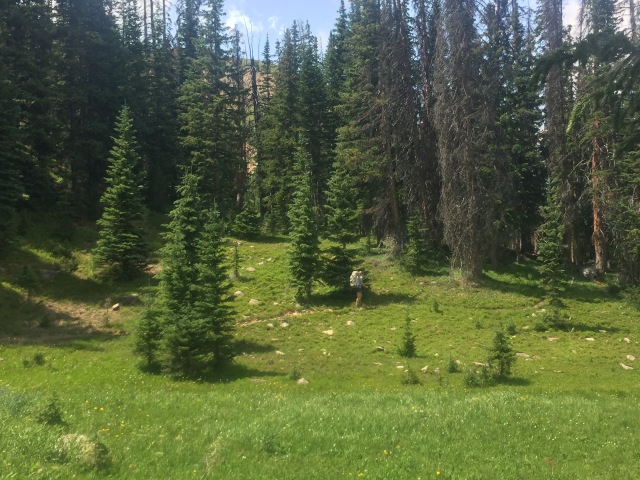 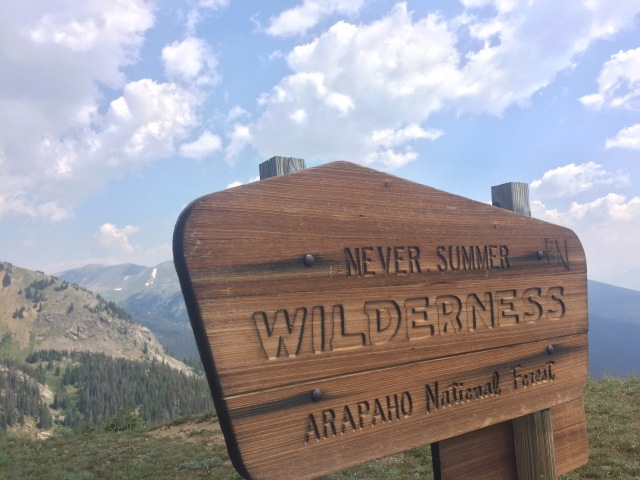 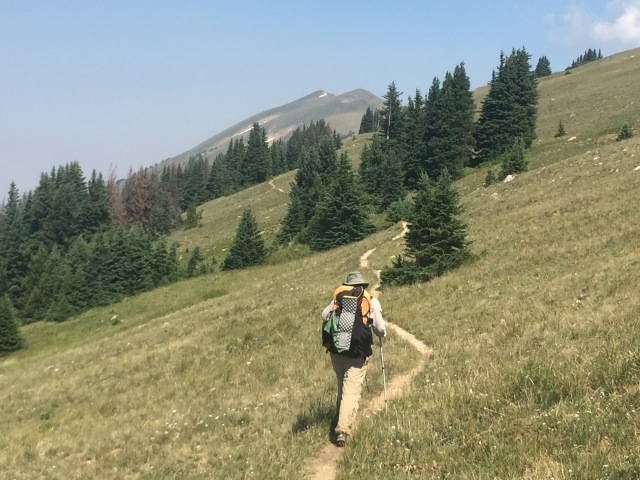 We met our first two Sobos this morning and they were moving quickly. Enjoy the rest of the trail guys it’s beautiful. We began climbing and noticed that we were no on trail via Guthook so we turned around and took the road. No realizing it had been rerouted. We should of stayed on the new trail instead we did the steep old trail instead of the new switchbacks. There is no tread as we began climbing uphill. It was a bitch! It took a long time and I barely felt like I was moving. Lots of slick shale, but I survived. The last bit was pleasant and solid trail to the lookout tower where Paperweight was waiting. We hung out and watched Chipmunk walk along the divide towards us. She was smart and took the new trail which she said was nicely switchbacked. We hung out as the ground squirrels harassed us for a while before beginning the downhill. The trail had markers, but no real trail. It was steep and I took my time as usual they passed me. Still don’t know why I’m so scared of steep downhills maybe because I have fallen so many times. The afternoon miles were on a nice trail again just cruising the divide. We got to the stream as the sun was setting to quickly set up. I had a scary experience with his alcohol stove. I caught my hand on fire and my pant leg for a second, but it didn’t really burn. It freaked me out and I just want my stove back. We climbed into the tent and fell asleep quickly. 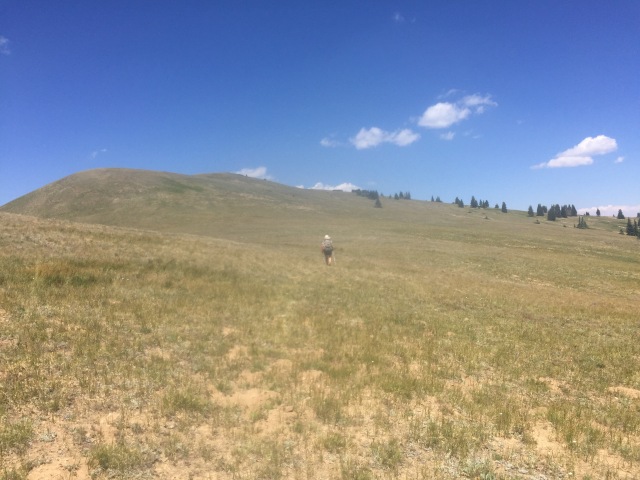 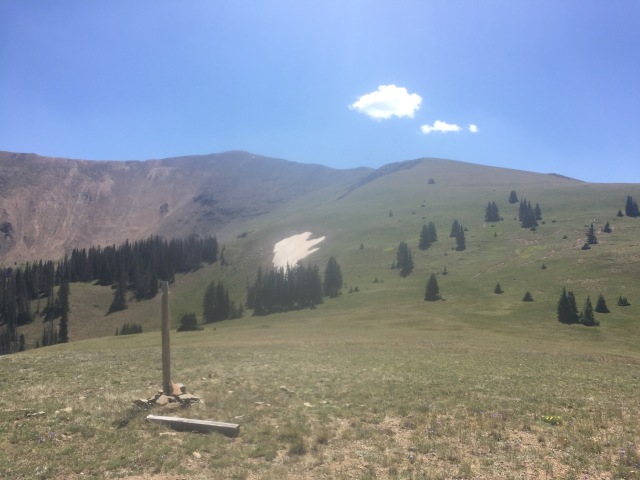 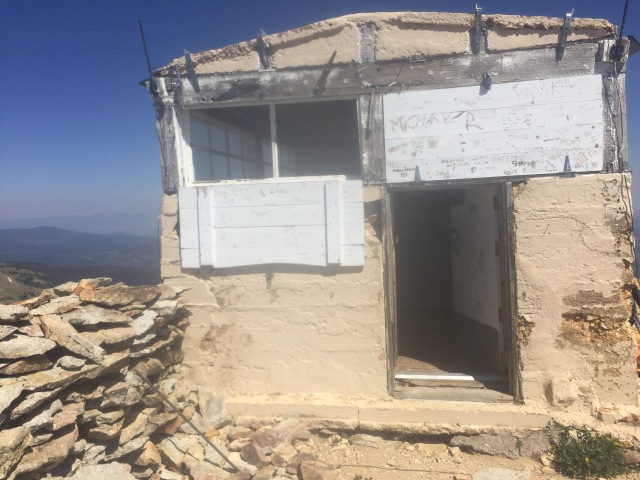 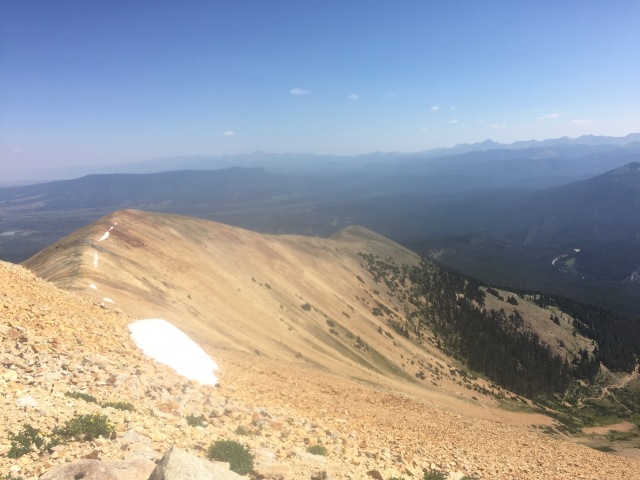 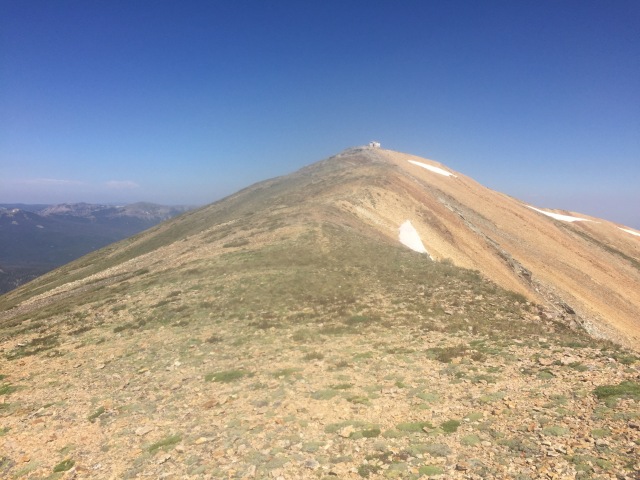 I lost the trail this morning at an intersection and decided to just bushwhack straight uphill. It was more work, but definitely quickly. I finally interested the trail and followed it to the gravel road junction where I waited for the other two to catch up for a bit. We walked along this road a while and it was easy on the feet. I chased a herd of cows for over a mile down the gravel road. A highlight was watching a calf hurdle a cattle guard. It was pretty amazing and I wish I had it on video. We cut through a field and down to the highway. Highway walking when it is raining is so annoying. Cars are zipping by and there was very little shoulder. So much road walking today and my feet hate it. Someday they hope to have the trail all connected so there will be no road walks. Someday, we will see. We turned off of the one highway towards the other one that led to Steamboat Springs. A man stopped and offered us a ride which we declined, but Chipmunk took it wanting to have a full zero in town. We found a campsite at an old trailhead parking lot off the highway. We could hear the traffic, but it would save us an expensive night in town. There is no point in getting a hotel room after 7 at night. We set up, cooked, and relaxed as people drove along the road having no idea we were camped nearby. 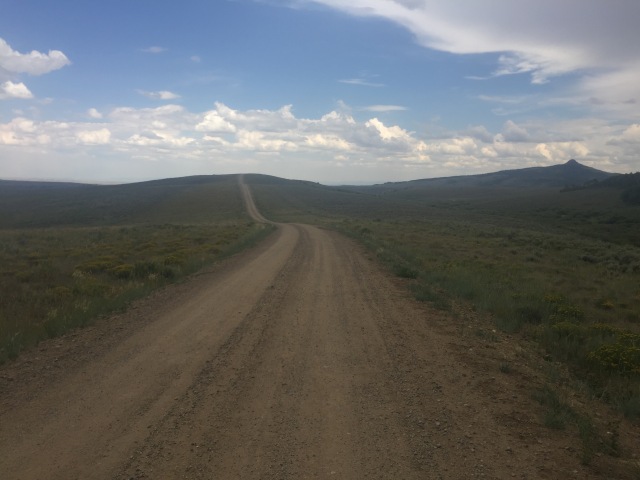 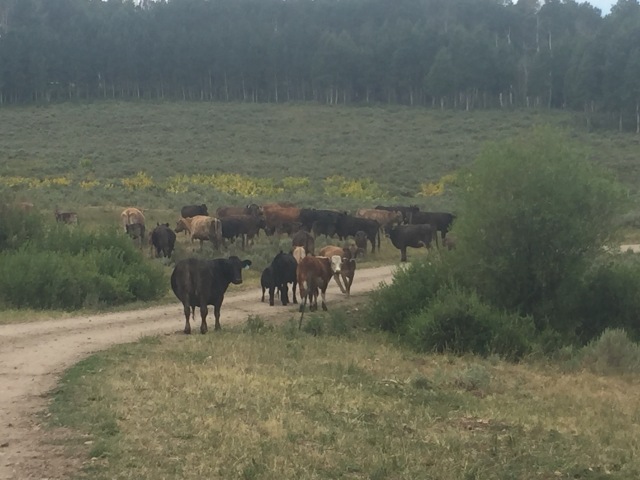 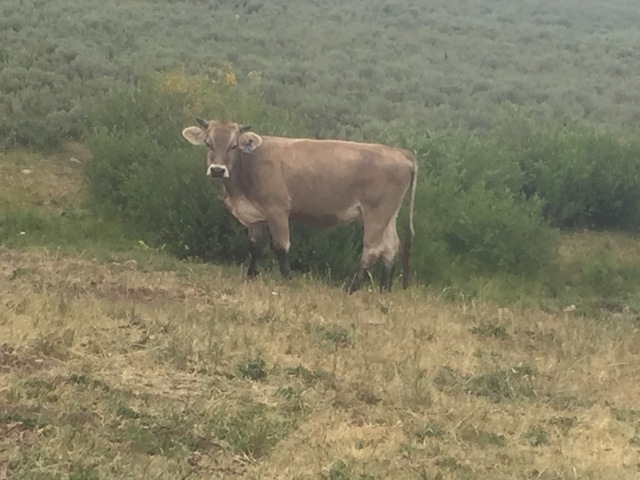 We packed up early and around 7am we were hitching into Steamboat Springs. It did not take long for a young man to stop and give us a ride. He was so curious about our adventure and we gave him lots of great information. He dropped us off at the visitor center where we got a bus map and some coupon books. I always like a good deal. We crossed the highway to McDonalds. A kind woman said “I saw you outside and a little bird said I had to buy you two breakfast!” Best way to start our day. She kindly bought our meals and chatted for a bit before driving away. Kindness like this warms my heart and I look forward to giving back. We ate then did our errands between grocery stores, an outfitter, and running into Crocs again. We hoped on the bus and made our way to Chipmunk at the hotel. Love free public transit! Every town should have this available to their community. It was an easy day of lying on bed, relaxing, looking ahead, and ordering delivery to the room. Almost a full zero since all we had to do was cross the highway and stuck our our thumbs. 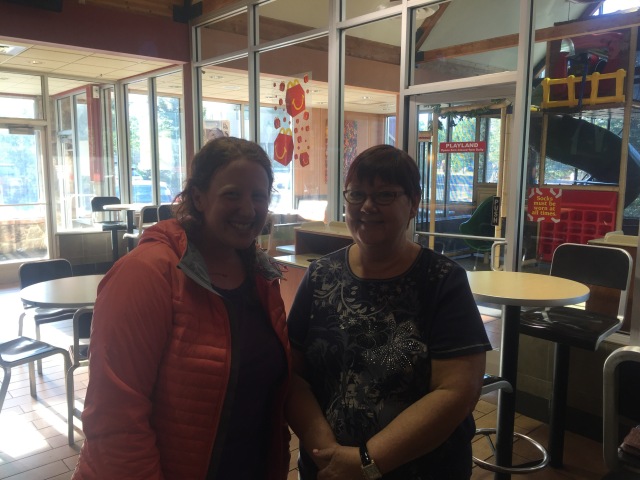 Our angel of the day!